12 Tiny Strata Law Changes That Will Make a Big Difference

There has been a lot of publicity about big-ticket items, such as the potential for forced sales of strata units by a majority of owners, the 2 per cent defects bond on developers and, of course, the change to pet by-laws.

But what about the rest of the 90 changes made to strata law? Here are those most likely to make a difference to you.

Fines for breaches of by-laws will usually be paid to the owners corp, rather than state revenue.

When it costs strata committees and owners time and money to pursue by-law breaches – especially if they ask their strata manager for help – there’s less incentive to take action when the fines that would offset the cost disappear into state revenue. Now fines will mostly be paid to the owners corp, but this won’t be a cash cow for over-zealous committees; they still have to go through the same tribunal process.

Owners corporations will be able to reach agreements with local councils to allow parking officers into their schemes to issue fines to rogue parkers.

Parking is one of the most contentious areas of strata life, partly because it is so hard to police inconsiderate and opportunist drivers. Under the new scheme, owners corps will be able to make their own arrangements with council parking wardens to patrol their car parks.

However, there is a downside. Residents who park over the lines of their parking spaces on to common property or leave their cars in visitor parking, however briefly, could be ticketed.

Owners corporations can now set limits on the number of people allowed to live in an apartment, provided the upper limit is no 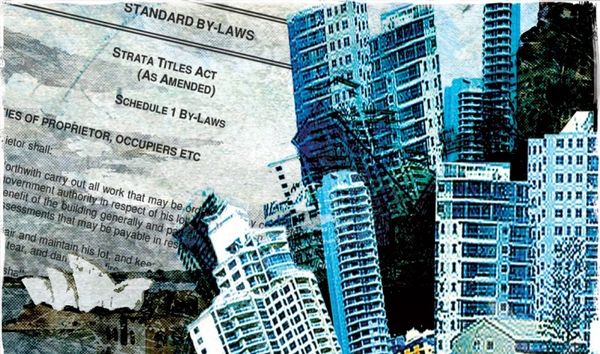