A friend got a bike over Christmas. Nothing fancy – just a second-hand, 12-speed rattler with sit-up handlebars and a basket on the front.

When she approached her building manager for access to their bike store, she was told it was full (which it was). Not that she was living in a bike crazy apartment block. Far from it. Most of the bikes in the locked cage had gathered more dust than a politician’s code of ethics.

This wasn’t a bike park – it was a bicycle dump. No one knew who most of the bikes belonged to, how long they’d been there or if their owners even still lived in the building. So my friend has to park her bike in her lounge room.

The problem for all of us is that there is no legal mechanism for getting rid of bikes left to rust on common property by owners and tenants who are long gone.

It’s a quirk in strata law that’s about to be fixed, bringing it into line with tenancy laws. Under the Residential Tenancy Act, a landlord can give departed tenants two weeks’ notice that they are planning to dispose of any property left behind. 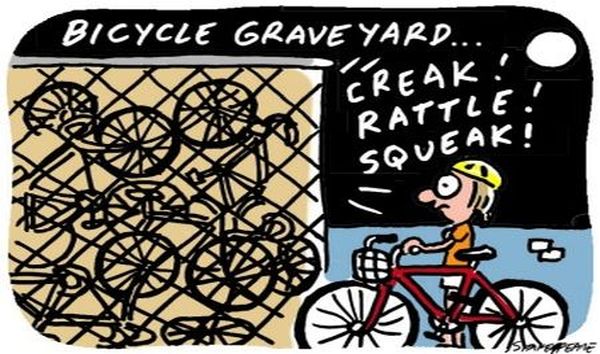